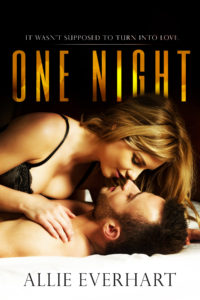 I’m a true romantic. I believe in fairy tales, soulmates, and happily ever afters. The last way I’d ever try to find my true love is with a one night stand. But that night of the party, I wasn’t looking for my soulmate. I just wanted to do something wild and crazy. So I did.

When a hot guy with dark hair, brooding eyes, and a chiseled face made eye contact with me across a crowded room, I held his stare and waited for him to come over. Before even asking my name, he kissed me. I kissed him back. And then, without giving it a second thought, I followed him to a room and had my first ever one-night stand.

The next morning, I took off. It was only supposed to be one night. Nothing more. But I couldn’t stop thinking about him. Even months later, when I was dating someone else, I was still thinking about that mysterious stranger and the night we shared. Then I found out he’s not a stranger. He’s the friend of my roommate’s boyfriend and has been looking for me all summer.

I can’t let him find me. We were never supposed to see each other again. I’ll admit it was a magical night. One I’ll never forget. There were sparks, fireworks, and this unexplained feeling that we belong together. But soulmates aren’t found with a one-night stand. They’re found with handwritten love notes. Flowers. A first kiss under the moonlight.

A one night stand is the worst love story ever. But what if it’s mine?