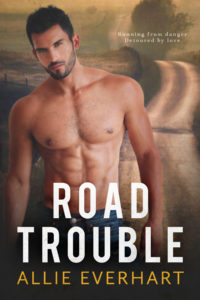 Against my better judgment, I back the car up and pull into Miller’s driveway. The guy has his back to me, but turns when he hears the loud rumbling engine of my car as it pulls up beside him.

“Hey,” I say, putting the car in park. Since I can’t get my window all the way down my view of him is partially blocked through the dusty glass.

“I was driving by and saw you here.” I turn the car off and get out so I can see him without the glass obstruction. Damn, he’s hot. Even sweaty and covered in dirt, he still looks good. “Are you Mr. Wilson’s grandson?”

He wipes the sweat off his brow with the back of his hand and glares at me. “Is everyone in this town as nosy as you?”

“I’m not nosy. I’m just being friendly. We’re neighbors so I thought I should stop by and say hello.”

Shit. I probably shouldn’t have said that. If he’s some crazy drifter with no relation to Miller, I don’t want him knowing where I live.

I catch his eyes lowering to my body, just a quick glance, first at my tight tank then down at my short skirt.

His eyes dart back up at my face. “Which house?”

“It’s a few miles down the road,” I say, trying to be vague, but there are so few houses out here that he could easily figure it out. “Mr. Miller didn’t mention his grandson was coming to town.”

“I’m not his grandson, not that it’s any of your business.” He looks to the side, and I’m pretty sure I saw an eye roll.

“It’s my business if you’re here without Mr. Miller’s permission. He’s a friend and friends look out for each other.”

The guy stares at me, that intense stare like he gave me earlier. “If he’s such a good friend, where is he right now?”

“In his house.” I point to it, having no idea if Mr. Miller is actually in there. “Which you would know if you were really here to see him.”

“Then where is he?” I ask, feeling more and more nervous as the guy stares at me with those deep brown eyes. It makes me want to look away, but I don’t. I hold his gaze, and for some unexplained reason, feel something stirring inside me. I’ve heard the body can confuse danger with arousal so maybe that’s why I’m feeling this way, although if that’s true, it means he’s dangerous. But I don’t think he is, which means the arousal I’m feeling is because I’m attracted to him. Why would I be attracted to a guy who’s has been nothing but rude to me?

“Florida?” I ask confused. “Are you sure? Because Mr. Miller isn’t the type of person who travels. In fact, I doubt he’s ever left Kansas.”

The guy glances over at the deserted road. “He came into some money. Thought he’d take a trip. An extended vacation.” He looks back at me. “While he’s gone, I’m renting his house.”

Now I’m even more confused. “Why would you rent his house? There’s nothing to do in this town and there aren’t any jobs. Why would you move here?”

He pauses, his eyes darting to the side. “Kyle.”

He wipes the sweat from his forehead and as he does, I notice a long red line along his left temple and a bump on the side of his head. The red line is dried blood but it looks like the cut is starting to break open, blood bubbling along the seam.

“Seriously, do the questions ever end? Are you the town gossip or what?”

“Your head. It looks like it hurts. I just…” I reach my hand up to touch his temple and he grabs my wrist.

“Stop.” His tone is softer now, and unexpected. When he grabbed my wrist, I thought he’d yell at me to go away. But instead he shuts his eyes a moment and takes a breath. He’s still holding my wrist but his grip is gentler.

“Please.” He opens his eyes and looks at me, but instead of that intense stare he gave me before, his gaze is softer, kinder, and suddenly, any fear I had of him is gone. He’s not a killer. Or a criminal. I know because my gut is telling me so. And after what I’ve been through with my dad, I trust my gut more than my head.