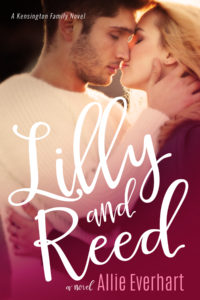 Lilly and Reed is written from the POVs of Pearce, Katherine, Lilly, and Garret, but most of the chapters are from Pearce, such as this one.

Pearce
“What’s going on?” I hear Lilly’s voice behind me and turn to see her standing there. “Did something happen?”

“No,” Rachel answers, wiping her eyes.

“Then why are you crying?”

She smiles. “You know me. I cry all the time, sometimes for no reason at all.”

“Did you need something?” I ask Lilly.

“Yeah. I wondered if I could stay with Reed next weekend. There’s a concert we want to go to on Saturday and since it won’t end until late, I thought I could spent the night there.”

“Will his father be home?” Rachel asks.

“Why? Because his dad is gone? How is that any different than when I’m at college? Reed and I still—”

“It’s not about that, although that, too, is a concern. But no, I don’t want you going there.”

“Then can Reed come here?”

“No. I have to go to Connecticut on Friday so you and Rachel will be staying with Garret.”

“You see him plenty, and you will see him when you go back to school. But right now, there are bigger things to worry about than how much time you spend with your boyfriend.”

“Like what?” she yells, tears forming in her eyes. “What’s so important?”

“Lilly.” Rachel reaches out to her but she backs away, her anger focused on me.

“Dad, tell me! What’s so important that I can’t see Reed?” She’s crying now. “Why are you trying to keep him away from me?”

I sigh. “This is one of those times when I don’t want you asking questions.”

She throws her hands up. “Seriously? You’re using that again? That no questions crap?”

“Lilly, I’ve told you there are people out there who are dangerous and I—”

“Don’t!” she yells, hiccuping through her tears. “Don’t even bother trying to explain. I know whatever you’re going to say is a lie. All you ever do is lie to me!” She storms off to her room.